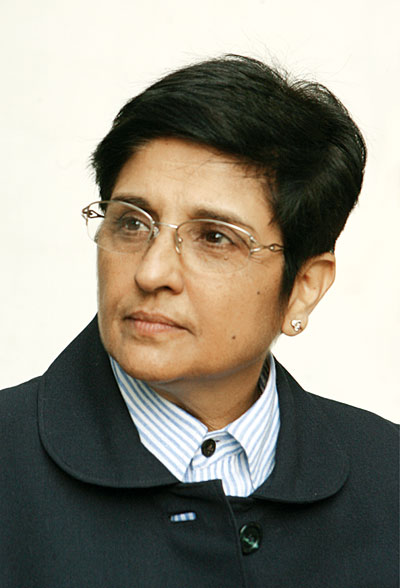 After her voluntary retirement in 2007, Dr Kiran Bedi is a full-time social activist. In an interview to Complete Wellbeing, she talks of her experiences as a woman…

What were the challenges you faced as a women and what helped you get over it? Was family support crucial?

Well, my family and we as daughters in Amritsar, were pioneers in many ways. We played tennis in shorts, cycled the whole day from one corner to the other, had short hair, wore skirts and track suits and all that boys did to become self-dependent. We daughters earned admiration as well as curiosity and awe. This is the way our parents brought us up. We were the product of hard work of my parents.

How do you think we can combat violence against women? Does it depend to a large extent on the woman?

No, a lot depends on the mindset of men in society as well. They are, no doubt, products of homes and schools where women, as mothers and teachers, play a pivotal role. But I firmly believe women could be the biggest stoppers of domestic violence.

Has India learnt to give woman an equal status with men?

Yes in certain areas, and no in others. It is still heavily male-controlled when it comes to key policy-making and transformative positions.

What would be your method of making the rural and urban woman aware of her rights?

Education and economic development, and networking of women. Also political and social empowerment.

Define the modern Indian woman. What could her principles be?

Self-confident, self-sufficient. Empowered and secure within. One who is no less than anyone else. Also, has the extra qualities special to a woman, which means she has both the hard and soft skills. One for whom marriage is an option and not a compulsion, or a means of security or economic dependence. One who has the skills to take responsibility for all her decisions, and has the courage to correct as the situation warrants. One who loves to give and asserts her right to get her due. One who works to empower all, with sensitivity for those who need her more.