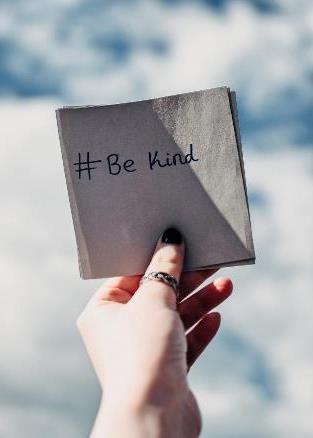 You are walking on the footpath when you trip over a protruding stone that you fail to notice. Fortunately, apart from minor bruises, you aren’t seriously hurt. As you pick yourself up, some passers-by glance at you kindly, making sure you’re okay, while another subset sniggers and a few stride on indifferently. Though you may be embarrassed by the attention, most people would prefer to be met with kindness. In this situation, a knowing look or an understanding smile, for a few brief seconds, is all it takes for one human being to connect with another. And, it can make a significant difference to how you feel after your minor mishap.

In his sensitive book Together, Vivek Murthy, who has been nominated to be the Surgeon General in the United States by President Biden, underscores the importance of kindness in fostering human connection. He describes a programme that was conducted across schools in Anaheim, California. Christened A Million Acts of Kindness, this programme, championed by the Mayor Tom Tait, involved schools actively promoting acts of kindness amongst students. As a result of children extending kindness to one another, both bullying and school suspensions plummeted.

Murthy outlines another programme that was spearheaded by a high school teacher following a horrific school shooting in Charlotte, North Carolina. Knowing that it was just impossible to go on with business as usual after the devastating event, Justin Parameter instituted the Undercover Agents of Kindness programme at his school. Parameter first put the names of all his students in a bowl and had pupils randomly draw a chit. The assignment that he gave students was to carry out a kind act towards the person whose name they had drawn and then write a report describing the experience.

So, students who hadn’t necessarily known one another well, went about making their lives easier. One student bought ice cream and stayed in the classroom with an injured student instead of going out to play. Another student gave his peer a stress ball because he noticed that his friend used to vent his frustrations in inappropriate ways. As a result of this programme, which gradually grew very popular, students started noticing and taking interest in each other’s lives and strove to make a meaningful difference. Murthy reports that this programme has mushroomed in other cities across the United States and the world.

Being kind is hazardous to loneliness

In a school in South Florida, another compassionate programme was initiated by a student, Denis Estimon and his peers. When he joined a new school, he noticed that not only he, but a subset of other children as well, seemed lonely and ate lunch by themselves. Teaming up with three classmates, Denis and his band would go around the school during lunch time and invite children who were sitting alone to join the We Dine Together group.

As kindness is infectious, this programme too spread its wings to fifteen other schools within a year and has taken root in other countries as well. Denis, who has subsequently graduated from high school, was so enthused by the success of his programme that he now runs a movement to champion inclusion in schools all over the world. He shared a poignant anecdote with Murthy that advertises the power of kindness. A mother of a boy with Asperger’s syndrome thanked Denis, her eyes brimming with tears, because her son had friends for the first time in his life, thanks to Denis’ brainchild.

To be happier, try a little more kindness

In her insightful book The How of Happiness psychologist Sonja Lyubomirsky describes how acts of kindness can enhance the happiness and wellbeing, not only of the receiver, but of the giver as well. In one experiment, participants were asked to consciously perform everyday acts of kindness like holding the door open for somebody, sending flowers to a friend, visiting a sick relative etc. for a period of six weeks. The first group was asked to do five acts of kindness spread randomly across the week. The second group was asked to perform five acts in a single day per week. At the end of every week, the researchers obtained data from the participants that described their well-intentioned acts.

To the researchers’ surprise, only the second group that performed five kind acts on a single day per week exhibited a considerable increase in their happiness levels. Lyubomirsky speculates that this might be due to the fact that most of us routinely perform small acts of kindness every now and then. However, to experience a significant fillip to our happiness, the acts need to stand out. In other words, we need to do more than what we typically do.

Make acts of kindness salient and poignant, not tedious or routine

In another study, Lyubomirsky and her colleagues measure the happiness levels of participants one month after the intervention was conducted. Participants who performed a variety of kind acts showed greater gains in happiness than those who performed the same good deeds repeatedly. For kindness, as a practice, to make a dent in your wellbeing, the acts need to salient, meaningful and poignant rather than routine or tedious. Further, Lyubomirsky reminds us that the kind acts need to be done voluntarily for you to feel better about yourself.