When you hear the words ‘senior citizens’, what comes to mind? Old ladies on a park bench discussing their daughters-in-law, or a grey-haired couple trudging along with their dog? Or old men and women confined to their beds without any family close by?

Prior to working on this article, my mind too was filled with stereotypical images of senior citizens. I slotted them into pre-conceived roles. It took talking to a handful of them to make me realise how varied their histories and experiences were, and yet how alike.

Mr. and Mrs. Sharma with their same peppered hair and smile are my wonderful neighbours. Mrs. Sharma is often seen meeting friends while Mr. Sharma would be going about his disciplined day, but always with his wife around. So it was but fitting to have them sitting side-by-side as I interviewed them.

Mrs. Sharma moved to Delhi from Punjab in 1972 and instantly longed for the open spaces and huge families she had left behind. I could sense a contrast in their personalities. But their views converged the moment I mentioned the youth of today. They both admitted they do not accept changing their values that easily. They felt that materialism was driving people towards a culture with compromised homes. Mrs. Sharma laughingly regretted how telephone conversations are now considered as good as face-to-face meetings. And then I asked her if she had ever worked or wanted to work.

She told me that despite her qualifications she agreed with her husband’s theory—that of men and women managing separate domains. Mr. Sharma stepped in, “I don’t interfere and give her full freedom in her domain.” She laughed out loud and added, “My husband’s support to me has been 100 per cent. We do argue, but if it’s my fault I accept it and this makes me happy. This surrendering, this thinking alike”. Perhaps, that is how they manage so beautifully together.

What keeps them happy? Mrs. Sharma turns to religion and doing charity, for peace. Her husband believes in disciplined seva-sadhna [service-discipline], but only [and he emphasised this] for his own inner satisfaction. “The key to happiness is discipline; it is what won me a gallantry award. Control over the self in this life is mukti [liberation]. Why think of life after death?” But his wife ends the interview with an aside to me: “I am fairly undisciplined, and I quite enjoy myself.”

This time I joined in the laughter.

Asha Kohli walked into her drawing room with complete confidence. She started teaching Literature in a reputed college in New Delhi in 1967, which incidentally was also the year she got married. Her profession has made her used to younger girls seeking answers to their questions; nonetheless here I was, in a tête-à-tête with this recently retired Associate Professor.

“I broke all convention in how I taught my students. I went beyond teaching to help shape my girls’ lives in other ways. That is where real satisfaction came from,” she said as we talked about her career. I felt a ‘but’ coming as the wise voice spoke… “But there needs to exist a balance between the radical and the conventional in life. Everything has two sides—good and bad. I don’t think one is better than the other. I do think that giving people their space is important, for if you don’t give it, it will be taken away anyway” she laughed.

“The key to wellbeing, for me, is acceptance. Fight against what is wrong, but accept that with changing times the dynamics of human relationships will undergo a change too. Literature exposed me to so many possibilities of human behaviour that I was never shocked if a certain relationship took a turn for the worse. I was prepared in a way, for I knew that it could happen!”

“Is it that easy for an older generation to accept the newness of behaviour and values?” I wanted to know. She confessed, “Well, the mannerisms to do with paying respect, for instance, may have changed. But you learn to move on with it. As a teacher, I had to understand the new age minds in order to shape them. In that understanding came acceptance too.”

And then a most interesting observation—she told me how, as you grow older, the gender stereotypes attached to a ‘young girl’ start to shed and people begin to accept you as a person. With age comes better acceptance of your self, as a wiser mind. For as you age, you learn to articulate better and express better too.

I asked her to share a tip for senior citizens, she said, “Engage. Even if it is just going for a music concert. Engage with the world around. Why sit back and feel retired, and lonely?”

as you grow older, the gender stereotypes attached to a ‘young girl’ start to shed and people begin to accept you as a person

The importance of family 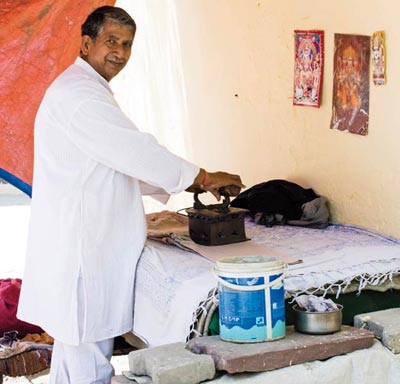 Murari Lal is a dhobi who has been ironing my family’s clothes for many years. Our interaction is usually confined to the count of clothes, change, credit and wishes on festivals. So when I approached him with an interview request, in his classic way of keeping his eyes averted and smiling, he acquiesced with an uncertain “Bilkul, saabji” [Yes, sir] He insists on calling me saabji though I am a woman.

In 1947, Murari Lal left his home in Pakistan and came to Delhi by train. “We just had to run for our life, that’s all I remember from my childhood,” he said. His grandfather worked as a labourer at the railway station while he earned as a gate-guard at Kumar Talkies in Chandni Chowk. They left death behind, but the dearth of comfort in Delhi continued until 1971, when he got a job in the Government of India Press as a mono-mechanic.

“My favourite memory is when my boss Arun Misra from Kumar Talkies took me to the hospital when I was ill. Himself, saabji! Down the years bosses kept getting more and more… impersonal. Times change,” he sighed. I agreed—times do change. “Once, we followed our elders without question. But now, we have to heed the advice of even our tiny grandchildren.” He looked at one of his granddaughters and mused…“I will never forget 1969. That is the year my joint family separated, it was worse than 1947 for me.”

“But you have a lovely joint family still—three sons and six grandchildren, surely that keeps you happy?” I asked. “Happy? It keeps me more than happy. Do you know what old people need for good health? Family. That is why I regret 1969. That laughter when my dada-dadi [grandparents] were around has never been heard again. I try to maintain that oneness. So what if my family is now too big for me to afford a pilgrimage to Shirdi? Though it is my dream, I will never go on a  vacation without my children!” Then he just said in the most relaxed tone he was capable of with me sitting on his charpoy— “I just tell my children never ask me what our caste is. Eat, work, drink, live. The rest doesn’t matter!”

He had said it all.

85-year-old Manjeet Kaur Bhullar among other things, holds me in awe of her prowess in Mathematics. She was 19 when she moved to Delhi and was one among only three girls who applied for a degree in Mathematics in Hindu College. “My parents said no to my dream of becoming a doctor. ‘Who will marry you then?’ they had argued. I didn’t mind and took up Mathematics, my second choice. However, the aim remained the same—to exceed no matter what I did. And excel I did!” After a proud smile she went on, “The determination to excel is something that comes from within. It cannot be given to you by your parents.” Silently, I stopped blaming mine.

Jobs were never a problem. Getting married while doing her MA was, for now her education suffered. In her evening classes she was the only girl among 80 boys who would push their way onto the seats. “During that period I was juggling too much. Work, home and studies. I did clear my MA finally. When I heard my husband telling someone I passed, I corrected him and said, ‘I did not just pass, my dear, I passed with a first division’.” This time my smile was wider than hers.

When I heard my husband telling someone I passed, I corrected him and said, ‘I did not just pass, my dear, I passed with a first division’

Her favourite role has been that of the Principal of a school. “I knew right from wrong and I stood by it. My honesty was notorious.”

“And then, I was managing as a single working parent to two children, all too suddenly”, said said, as she revealed her husband’s passing away. Her friends took care of her even more than family then. “My attitude of a disciplinarian stood me in good stead. I emphasised the importance of academics to my children. Plus, I had always been more strong-headed than my husband, so I had developed a sense of confidence much before he left me,” she said.

As a senior citizen, she says it is important to interact and be with family, but it is equally essential to have your own space and time.

You may also like: The wise old art of story telling

From my dhobi to a DU professor, a middle-class couple to a single parent, each individual is striving to fill up their ‘senior citizen’ life with meaning—to keep their personas ever-evolving, to redefine what ‘retired’ means and to develop even as they grow old. And I am grateful to them for sharing life’s little lessons that they picked up along the way, for all to partake of.

A version of this was first published in the June 2014 issue of Complete Wellbeing.