The sugar was brown and rectangular. The dal flat and green. The only salt in the kitchen was kept in a thimble sized flat silver plate, with a tiny spoon for serving it. If I had seen all this before dinner time, hungry as I was, I would have taken off to the nearest eatery to get myself food, as I know it. But I was tired, hungry, and it had been a long seven-hour train journey, with heavy bags to lug up and down the stairs… a process that ended with the eighty circular wooden steps leading four flights up to the house I was now in. Besides, of course, I was in Paris, and it was cold and threatening to rain. I settled into the dining chair, ready to gulp down what I was told was a meal of purely organic food. At least, it smelt good!

Hmm, surprise! It tasted good too.

My friend Rukmini Chatterjee, a dancer who combines her knowledge of Bharatanatyam with that of hip hop artistes, western music players, Indian singers, Kathak dancers, and heavy metal bands to create amazingly varied shows for stage, had created a soup out of the dal, and a macaroni dish to go with it.

Neither of them had any spice. The soup had some spinach leaves, coriander and garlic as embellishments, and she squeezed a large lemon into it before serving. It was astonishing, how good it tasted.

Suddenly I knew the meaning of wholesome food. “Do you need some salt?” she asked, pushing the minuscule salt holder towards me. “I have added almost none.” I shook my head; it seemed perfect as it was.

On to the macaroni. Rukmini had stirred in some tomatoes, garlic and herbs into the pasta, and though it looked dry, there was a moistness that was just right. My idea of pasta is loads of tomato and cheese, but I realised this worked just fine. “This is yum,” I said, my mouth still stuffed.

“Everything is organic,” she explained, “which is why it tastes so good. And we need to add no spice at all.”

It was quite an eye opener. Why, I wondered, did I think organic was equivalent to boring and tasteless? Everything I ate that night and the next day; the crackers made from organic wheat, the organically matured cheese, the grapes that tasted like none other I had tasted, was delicious. I hogged.

You are what you eat

“It is our way of celebrating Nature,” Rukmini explained.” We learnt it from friends we met some time ago. They were around 70 when we met them, and they inspired us to start eating organic food. They only eat organic food and their entire being radiated perfect health. I have always been aware of the fact that whatever you put into your mouth, who cooked it, where it comes from has an immense effect physically and psychologically on the being. Annie and Noel Blotti are physical proof of what organic food taken over a long period of time does to the body. It changed me,” she added.

Luckily for Rukmini, her husband, Pierre La Cloche De Vallombreuse, a renowned photographer who creates socio-anthropological photo documents that he puts together as books, also respects the natural way of eating. Organic food has been on their table ever since that first meeting with the Blottis.

Eating organic in Europe is not tough. A growing awareness about a more holistic approach to life has resulted in organically grown food and clothing fibres being more easily available. It might cost a bit more, as organic produce yields are not consistent and are also easy prey for natural enemies, but the benefits are seen to be much greater than the inflation in costs.

Rukmini who lives in the heart of Paris finds shopping for food easy enough. “I buy everything at Naturalia, which sells organic food and other organically grown produce.”

Though she has spent her younger years in India, and returns frequently, Rukmini’s acquaintance with typically Indian food is limited to eating it on visits home.

In a way it suits the couple, as finding organic Indian condiments in Paris might be a bit of a challenge, or is at least one not worth taking up.

“I cook as I feel,” Rukmini says, “the simpler the better. Mostly I make vegetables or lentils, which taste better when they are organic so a simple spinach soup can be real treat.”

I agree, I have proof of this in the meal I have eaten.

In her own way, she decides whether a meal should have Indian or Western leanings: “I guess it is in the herbs or fresh leaves I add to the different preparations that make my food taste more Indian or European. If I add fresh coriander to a quinoa soup it tastes more Indian and when I add Basil to an Indian dal it tastes more European,” she says laughing. “Anyway, for us food is a celebration for our body, a toast to good health, and strict recipes are not necessary.” Listening, Pierre nods in agreement emphatically.

No compromise on nutrition 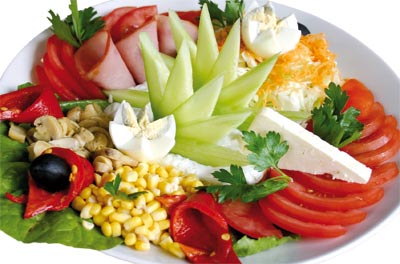 Celebration of life is a part of their work. Pierre travels extensively, spending up to six months with tribes as he acquaints himself with their ways, and lets them understand his reasons for being there, even before he starts shooting. This, he finds, gives him uninhibited glimpses into their life and results in real unselfconscious photographs. When she is not working on a production, or performing, Rukmini travels with him, though, “we always end up taking different flights to and from the same destination,” she laughs. “With Pierre we usually travel to tribal places where the food is very simple yet wholesome, because the vegetables, fruits, poultry, everything is grown or raised on that very land. They are usually far away from polluted places. So again we are more or less eating organic food. The tribal people are hardy and enjoy simple meals, organically grown, and I see that as further vindication of our choice.”

And nothing about organic grains or food—which has no extra nutrients added artificially—makes for lesser goodness. Pierre has trekked vast distances, crossing hilly terrain in pursuit of his pictures, and more than once, Rukmini has gamely trotted along, not aware of the tough paths she would be traversing. And of course her rehearsals and performances need their own brand of stamina, which their brand of eating does seem to provide in good measure.

“Of course,” Rukmini explains, as a dancer touring countries as far flung as Norway and India, she cannot be rigid about food habits. “On my dance tours I eat and relish the food of the country I am in. I am not a hardcore organic food eater, though I try to eat a lot of fruits and vegetables, to keep as close to my food habits as possible.

“And when I am back home in India I eat Indian food, organic and non organic, and relish it completely!

“I think eating the way we do has changed us a lot,” she adds, “I see the difference in my skin, and hair. I see it in the way it gives me stamina and endurance.”

I am beginning to see her point of view. Especially when I see the bright sparkle in her eyes, that even the worry over her mother’s pending operation back home cannot dull!

A version of this article was first published in the November 2012 issue of  Complete Wellbeing.