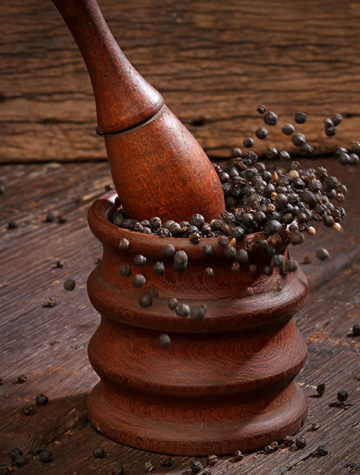 Often called the ‘king of spices’ or ‘black gold’, black pepper is one of the world’s most traded spices. Also known as the peppercorn, it is actually a berry obtained from the pepper plant.

In the ancient world, pepper was so valuable that it was used as currency to trade. A sack of pepper was said to be equivalent to a man’s life. Pepper and other spices were the reason that Vasco da Gama came all the way from Portugal to India.

Apart from the black variety, there is also green, white and red peppercorn. Pink peppercorn is also found but it is the fruit of a different genus of plant. White, black and green peppercorns are nothing but the same pepper fruit harvested at different stages of maturity. Green peppercorns have a milder flavour than black peppercorns because they are plucked before they ripen. Green pepper is often pickled by storing it in brine or vinegar.

Black peppercorns have a more robust flavour because they are left on the vine to mature. In traditional estates, when the peppercorn is about to turn red, it is plucked and left to sun dry till the skin shrivels up and it turns black. But today there are techniques that help speed up the process of obtaining black peppercorn.

Peppercorns get its spicy heat from the chemical piperine, which is found on the outer fruit and in the seed. They are also rich in anti-oxidants, which help the body remove harmful free radicals and protect it from cancers and diseases. Peppercorn contains moderate amounts of vitamin K, iron and manganese with trace amounts of other essential nutrients, protein and dietary fibre.

Pepper must be stored in airtight containers to preserve its piquancy because it easily loses its flavour and aroma through evaporation. It is for this reason that pepper must be ground just before you need to use it, and not way in advance. Heat also has an affect on the smell and taste of the pepper, so adding it near the end of your cooking process will help to preserve its flavour.

Listed below are some of the benefits of pepper.

Adding freshly ground pepper to your dals and gravies not only adds flavour to your meals but also improves digestion. The piperine content of black pepper stimulates the secretion of hydrochloric acid. This acid is essential to facilitate digestion. A regular intake of peppercorns will reduce incidents of flatulence, indigestion, diarrhoea, constipation and acidity.

All stuffed up? Just add a few pinches of pepper to your bowl of soup—the perfect comfort food when you’re sick—and you’ll soon be breathing easier. Ingesting pepper provides relief from throat congestion, sore throat, sinusitis and cough because peppercorn tends to eliminate mucous by giving you a runny nose.

Black pepper is a natural exfoliator to help you get rid of dead skin and ward off skin infections. The anti-oxidants in black pepper stimulate your blood circulation to deliver more oxygen and nutrients to the surface of your skin, leaving it glowing. Pepper helps to cure vitiligo, which is a skin disease that causes some areas of skin to lose its normal pigmentation and turn white. The piperine in the pepper stimulates pigment production in the skin, and is therefore considered a safe natural cure for vitiligo.

Keeps your clothes from fading

Grab your pepper shaker if your favourite clothes are starting to fade. Washing your clothes with pepper prevents them from fading. Sprinkle about a teaspoon of ground pepper per load, along with detergent into your washing machine at the start of the wash cycle. It will drain away with the water, so there’s no extra mess to clean.

Adding black pepper oil to your food helps to remove toxins from the body. This is because when ingested, it increases sweating and urination, which gets rid of all the toxic substances from your body and clears the pores on your skin.

Pepper’s excellent anti-bacterial and anti-inflammatory properties cause it to be commonly used to treat conditions of tooth decay and toothache. Powdered black pepper or a decoction of it is used to treat earaches, eye problems, toothaches, hernia and insect bites. All this besides its great taste! No wonder it is called black gold!

This was first published in the March 2015 issue of Complete Wellbeing.