To say that Sikkim is breathtakingly beautiful is to state the obvious. However, its beauty is almost schizophrenic—serenading you sometimes and at other times, grabbing you rudely, as it encroaches on your consciousness and overtakes your mind, making you slave to its lurching landscapes and picture perfect vistas that spring on you at every hairpin bend. Just before you have the time to take in this startling and stark beauty, the scene changes in a flash, the road narrows excruciatingly, and another view fights for your complete attention.

Sikkim is a small state. Just 2740 square miles, neatly divided into East, West, North and South. The state capital, Gangtok is in the North. Gangtok is, unlike most of Sikkim, pretty well developed. Five star hotels, internet cafes and offices dot this hilly capital. Orchids are in full bloom, and an annual orchid show is organised at Gangtok [held mostly in March], that attracts international tourists. Your mind boggles at the sheer variety and colours on display and any trip to Sikkim should always coincide with this flower show.

In fact, the entire North Sikkim is strewn with waterfalls, and frighteningly rough roads, which make them slippery as well. It’s easy for an atheist to become a devout here, I muse, as the mind turns to the Almighty once too often to take you through safely to your destination! 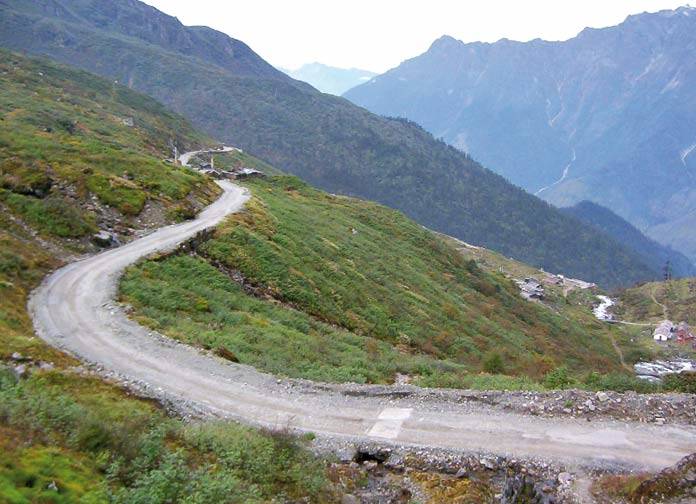 It’s simply overwhelming, this constant tussle between the powerful beauty of the land and its difficult terrain, which darts exclamation marks at every jeep that dares to traverse its roads that are virtual cliff hangers. A mere 40km jeep ride from our hotel in Gangtok to the Tsongmo lake [also known as Changu lake] takes close to two hours, our nerves rattling as much as the jeep. The tyres skid, settle and skid again as they come to grips with the boulders that double up as roads in this terrain that defies every man-made contraption. We marvel at the chatty jeep man’s driving prowess as he takes us from 4700 feet to 12400 feet, deftly willing the jeep into submission.

It’s man versus nature in Sikkim

Tsongmo lake strikes you as an oasis, albeit amidst huge rocky mountains. It is tranquil, serene and after the haranguing trip to reach there, you need that dose of calm and peace. It’s almost as if the landscape has laid out a haven for you after testing your mettle—and the sight of the lake is a reassuring reminder that you’ve made the grade. As a reward, you are treated to the lake that is flanked on all the sides by snow-capped mountains. It’s still here, very still. The waters offer you a crystal-clear, ripple-less reflection as we unmount from the yaks who have trudged there with us. Or rather on whose back we have in turn precariously balanced and clumsily sat on. The gear doesn’t help much in any of these adventures. It’s bitingly cold and though the snow has melted on the lake, its nip and brace is very much present in the air. So we, like all good tourists, flock the makeshift shops that line the path to the lake, and equip ourselves with colourful and warm coats, mufflers, monkey caps, gloves, boots—the works! The boots and the not-made-to-order apparel do get in the way of wading through the melted snow that flows through the pebbles dotting the lake. Then again, we are more than thankful for their shield in protecting us from the icy winds and chilling temperatures that threaten to make icicles of us.

The 360 degree panorama of snow-laced mountains, and the languid lake nestling protectively in its centre, makes for compelling visuals. So we get trigger happy, and the yaks too plod happily into the frame.

Lachung, around 120 kms from Gangtok, is as remote and cut off as it is magnificent. It is cold here and we have been warned that there is no provision for hot water in the rooms as electric supply is erratic. We arrive at an exotic-sounding hotel. However, it fails to live up to its exotic name. The room can accommodate exactly four people and two suitcases, provided those four people do not move around too much. A creaky bed, a creakier wooden floor, and a basic bathroom form the hotel ‘room’. Hotels here are like that…basic. Food facilities are equally basic but fresh. We know for a fact that the food we eat is actually cooked a couple of hours ago and not something that the refrigerator relinquished after holding on for long.

But then, people don’t brave the roads and the basic amenities that Lachung offers for creature comforts. Nature lays out a resplendent show at the Yumthang Valley at 14,000 feet above sea level. Yumthang is home to the Shingba Rhododendron Sanctuary, and has over twenty-four species of the rhododendron, the state flower. But more than that, Yumthang is a vast grazing pasture enclosed on all sides by the splendour of the ice-peaked Himalayas with a tributary of the river Teesta gurgling through the pebbles—framed by the grandeur of clear deep blue skies. Except for the wind chill that engulfs us, everything is perfect—and all is right with the world. Some enterprising souls have put together a makeshift stall of hot chai and soup and nothing warms the heart and tides us through the next couple of hours as much as these steaming cups.

Time tends to stand still at Yumthang. Or more accurately, it ceases to have meaning here. Verdant grasslands are waiting to be walked on; little hillocks throw up myriad photo opportunities, white polished pebbles spring deftly from our hands to be swallowed after rippling in the icy flowing waters… Yumthang has all the makings of a paradise waiting to be discovered. So discover it, we do. In our own way. Stop, stare, internalise, marvel, meander, drift, dream—the green meadows flanked by the whiteness of the ranges bring home the sheer magnitude and exquisiteness of nature with startling clarity. At Yumthang, nature seeps into your being with astonishing ease.

Nathula Pass at a height of 14000 feet above sea level is at the India-China border. Icy winds and heavy snowfall— and slightly low oxygen levels characterise this Pass. Permits need to be obtained to travel here, and can be easily arranged at Gangtok. The Pass is open only on certain days of the week, so check before hand while making travel arrangements.

A large part of Sikkim, with the exception of Gangtok is largely untouched by the advances of the modern world. You come to a land in which nature rules.

If North Sikkim is marked by its gushing waterfalls, West Sikkim is cloaked in mist, a bouquet of fauna, and awash with clouds. Pelling, where we halt, is quaint, straight out of a picture book. Day excursions take us to the Rimbi waterfalls, the Pemyangste Monastery, rock gardens and Yuksom, which means ‘the meeting place of 3 monks’ and was the first capital of Sikkim.

But to really enjoy the solitude of Pelling, simply soak in its array of flowers that make a colourful carpet on the road, take a walk along the wooden houses that line the mountainside. Pelling is also the trekker’s delight, with its scale-worthy peaks, crisp air and challenging trekking terrains.

A holiday to Sikkim in effect means bowing to the nature of nature. Acceding that it is more powerful, compelling and wondrous than us. And then surrendering to its temperament, totally.

Reaching there: Nearest airport is Bagdogra, which is 124 km from Gangtok [around 3 hours drive]. Most leading domestic carriers operate flights to Bagdogra from Kolkata, New Delhi, and Guwahati.

Best time to visit: March to June and October to December. January and February are very cold and snowy.

Carry: Light woollens in summer. If you have gloves and monkey caps, pack them along as they will be needed if you visit Nathula Pass, Yumthang Valley and Tsongmo lake. Also pack in thermal inner wear. Carry sufficient mineral water or stock up at Gangtok since places like Lachung are remote and do not have regular supplies. Also carry dry snacks especially if you are travelling with children.

Shopping: Woollen wear—gloves, mittens, monkey caps and shawls. The market place in Gangtok and the sightseeing spots have a variety of woollen inner and outer wear. Bargain.

Plants:Seeds and saplings that survive air travel and bloom in city spaces after the long haul. Take your pick of orchids, exotic and colourful varieties of seasonal flowers. Ask for planting instructions – water and sunlight requirements.

Eating: Momos, momos, momos. In all their tempting flavours and fillings. Plus thupka, chowmien, and thanthuk.

This was first published in the July 2011 issue of Complete Wellbeing.