Exercise yields better results if it is also mentally stimulating. And that’s why many people are choosing different martial art forms over gym workouts to stay fit and add some adventure to their lives. One such martial art form that is gathering a growing fan following in India and abroad is Kalarippayattu—the martial art form that looks straight out of some Hollywood action flick with people flying in the air as they spar each other. But it isn’t as impossible as it looks and is a great mind-body workout. Let’s find out more about this ancient practice…

Kalarippayattu is a form of martial arts that has been practiced since thousands of years in Kerala—it is one of the oldest and even has a mention in the Hindu sacred texts. Its training system and application techniques are considered unlike any other. It is based on the ideal of a sound mind in a sound body. That’s why students of Kalarippayattu are trained to achieve perfect mind-body coordination. The movements have been inspired from nature—they are combat techniques of warrior animals such as the lion, tiger snake and elephant. Earlier, it was used for combat and now it is practised as a martial art form.

There are three schools of Kalarippayattu coming from three parts of Kerala—Vadakkan, which comes from northern Kerala, Madhya Kerala style that comes from central parts of the state and Thekkan that comes from the south. It is said that the Vadakkan style has been conceived by Parasurama, the mythological sage, who also created Kerala. Sage Agasthya is credited for creating the Thekkan style.

What does the training entail? 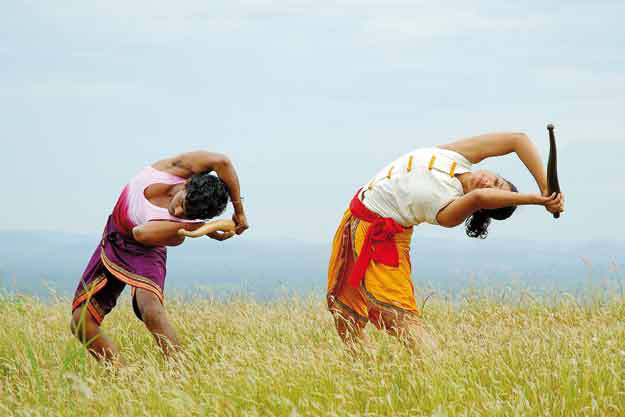 In addition to learning self-defence, those who wish to become masters in Kalarippayattu also have to learn ayurveda. Students are taught to locate vital points [marma] of the body. Treating the injured or ailing marmas is known as Kalari Marma Chikilsa. Once the vital points are set right, a person is healed of injury and even emotional insecurity.

A true guru of the Kalari is a trained ayurveda physician. Students aspiring to be masters are also trained in the traditional orthopaedic system that involves the setting displaced bones. Masters also have knowledge about using different oils, pastes and herbs for treating muscle and bone injuries.

What are the benefits of Kalarippayattu?

Practising Kalari harmonises body, mind and spirit. It facilitates mental and spiritual growth—practising the stances is almost like meditation. The graceful movements improve coordination, flexibility and reaction time and enhance circulation of fluids. Practising Kalari stretches your entire body, including your chest, back, arms, shoulders and legs. This increases flexibility and helps in removing the kinks and pain embedded deep in the tissues. It cleanses the body of toxins by activating the lymphatic system. It rejuvenates body and mind, making you more energetic, alert and confident. It improves concentration and focus—it enhances your ability to do any activity with skill and precision.

Practising Kalari is a great stress buster. It will increase your ability to handle stress, both physically and mentally.

Can people over 40 learn Kalarippayattu?

Individuals as young as eight years and as old as 50 can learn Kalari. I have students who are even older than 50 learning the form. Anyone, from any walk of life who wants to stay fit and agile can learn it.

Does one need to have a basic level of fitness to learn it?

There is no such fitness level required to learn Kalari. Once we start learning Kalari, with practice our body becomes flexible and mind, sharp. However, it is not recommended to learn the form [without first consulting your physician] if you have had a heart attack, kidney trouble or other major ailment.

This was first published in the May 2012 issue of Complete Wellbeing.