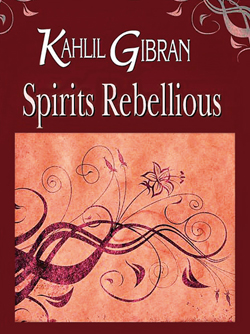 It’s not often that an author can write passionate prose and sublime poetry at once; when he does, he must be Kahlil Gibran.

In Spirits Rebellious Gibran shakes you out of the slumber of the societal norms and earthly laws that have held mankind in shackles and ignites your soul with his fire and his rebellion.

When Rose Hanie marries the rich Rashid Bey Namaan; a man old enough to be her father, she becomes a “bird in a gilded cage”. For a while the gilding is nice, but who can ignore the longings of the heart for a love that “unites both hearts and affection”? Marie can’t wait to fly; and she does—to another man whose love makes them “one member of life’s body and one word upon the lips of God”. The price of her freedom is the sacrifice of her body.

Of course, society is uncomfortable! In its eyes Rose Hanie is a prostitute who destroyed her sacred marriage and deserves to be exiled. But is that the way God sees it? Remember, Gibran is a prophet and he can see it through God’s eyes. Hear him in the voice of Rose when she says, “They neither understand the law of God nor comprehend the true intent of veritable religion nor distinguish between a sinner and an innocent. They look only at the surface of objects without knowing their secrets… In God’s eyes I was unfaithful and an adulteress only while at the home of Rashid Bey Namaan because he made me his wife according to the customs and traditions by the force of haste before heaven had made him mine in conformity with the spiritual law of love and affection… but today I am pure and noble in spirit… they have exiled me now from their society and I am pleased, because humanity does not exile except the one whose noble spirit rebels against despotism and oppression. He who does not prefer exile to slavery is not free by any measure of freedom, truth and duty.”

This is the first of three stories in Spirits Rebellious and if you haven’t wept yet, get ready to do so in the second. It’s called The Cry of the Graves. When the Emir punishes three people by death—one man for killing another because he was about to rape, a married woman for spending an hour with her childhood love and a poor man for robbing a monastery to feed his starving children—Gibran questions what the people call justice. “When a man kills another man the people say he is a murderer, but when the Emir kills him, the Emir is just… Shedding of blood is forbidden but who made it lawful for the Emir? Shall we meet evil with evil and say this is the law?”, asks Gibran.

His questions are like those of Khalil, the heretic monk [in the third story] who is expelled for questioning, and rebelling against, the corruption of his convent. In his fight—and victory—is the story of one man against the old order, and a call to fight the enslavement of men by men. It’s Gibran’s cry to return to the “eternal law that made life beautiful and to the truth that shines upon all peoples of the earth”. And it’s written in language that’ll make your soul stir, your heart cry, and your hands rise to your face to wipe the tears.