As children, the monsoons meant playing in the rain, sailing paper boats in puddles, the start of school and so many things to look forward to. But as adults we’ve lost the joie-de-vivre of the season. Thoughts that often pop up are—mucky roads, grey skies, stalled traffic, and reaching office dirty and wet.

Monsoon is a joyful time of the year, because the earth revitalises itself. For many Indians, it is a time of festivity because a good monsoon means an abundant harvest.

So get into the spirit of the season and discover the long-lost delight that the monsoons herald.

The Valley of Flowers, Uttarakhand 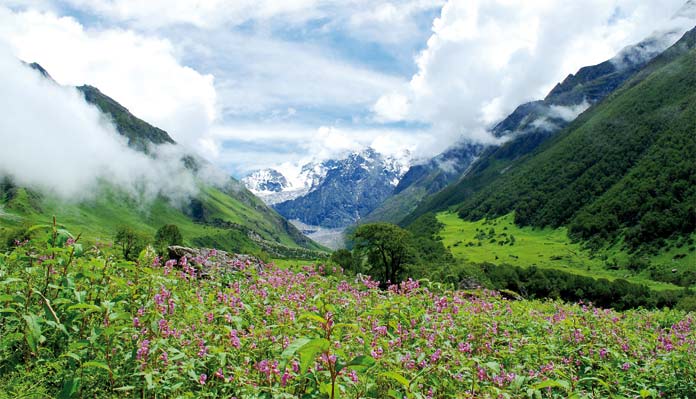 If the drizzling rain brings out the adventure junkie in you, then grab your hiking gear and head to the Valley of Flowers. This is an untouched piece of paradise open only between June and October, when the snow melts. The nearest airport is Dehradun and the nearest railway station is Rishikesh, after which the adventure begins, as you have to complete the journey either by jeep, local bus, on foot or on a mule till you come to Ghangaria. Visitors have to stay at the base camp Ghangaria because there are no lodges in the valley. It is a trek of three kilometres from Ghangaria to the Valley of Flowers.There is only one entrance and you have to pay an entry fee. After entering the park, it is another long trek to where the actual valley begins. Despite all that strenuous hiking, the vision that you encounter makes it all worthwhile. Flowers create a colourful carpet, while charming birds toot away with snowy mountains looming at a distance. Visitors must carry their own food and water and be considerate of the environment.

The best time to visit is around August when the flowers blossom. It does rain fairly often here and the weather becomes extremely cold, so raincoats and jackets are a must. If you are lucky, you might spot the elusive fauna. The gurgling rivers, tinted flower carpet and scenic beauty of the place will have you keeping your hiking boots out—for a return visit. There’s a reason why Kerala is called ‘God’s own country’. Green trees, blue rivers and oceans and vivid-hued birds and animals flourish here. Time literally stands still, allowing you to take in the splendour of the land. Alleppey or Alappuzha is known as the Venice of the East and it has retained much of its old-world beauty.

So while the grey clouds abound, spend your monsoon cosy and warm inside a houseboat, leisurely cruising the backwaters of Kerala. You can glimpse an earlier era as you sail pass the brightly coloured houses along the canals. While the surroundings might take you back to simpler times, you don’t need to rough it out. Though thatched and traditional on the outside; most houseboats have modern amenities. There are oarsmen and chefs onboard to cater to your every need. But if you are looking for a bit of excitement, you can attempt to catch your lunch. The peppery cuisine Alleppey is known for will keep you warm during a windy monsoon.

The famous Nehru trophy boat race is held on the second Saturday of August, while smaller Snake boat races are held from July to September. Watch the locals battle it out in the long, brilliantly decorated boats. These rambunctious races are an integral part of Kerala’s culture, so make sure to catch at least one of these thrilling events.

And if you do decide to venture onshore, pamper yourself with that famous Kerala ayurvedic massage.

As you drift along, relax with a hot cup of locally-grown coffee and enjoy the beauty of Alleppey as the rain drops fall all around you. 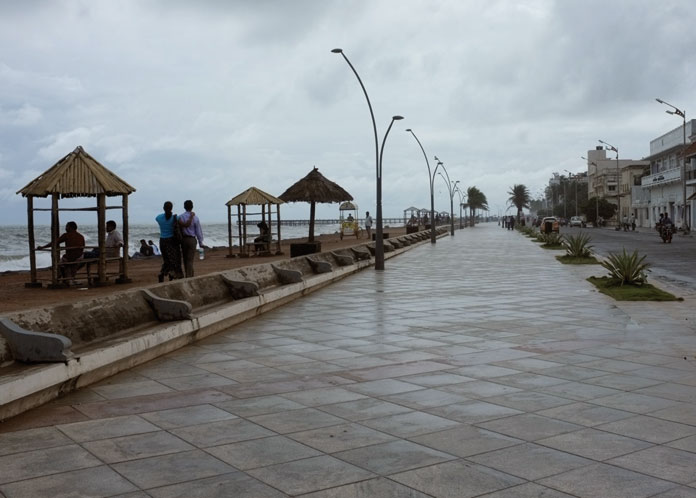 Immerse yourself in the serenity of Puducherry
Pic Courtesy: Licensed under CC BY-SA 2.0 from Aleksandr Zykov, Source: Flickr

It’s summer in Europe and you long to stroll down the French Riviera, but you can’t due to various constraints? If you can wangle some time away, Puducherry [formerly known as Pondicherry] is the perfect place to visit.

The monsoon begins here in late June with light sprinkles of rain and goes on until November, when the rains get considerably heavier. There is cohesiveness in the city as both the Tamilian and French culture are represented through the architecture, people and gastronomy.

The city is divided into Ville Noire [the Indian quarter] and Ville Blanche [the French quarter]. The smell of the wet earth arises as you amble down Ville Blanche and the pastel shades of the colonial houses are pronounced against the overcast sky. The immaculate beauty of the cobblestone streets and French construction makes you feel like you are walking down a rue [street] that could be anywhere in France. Sit at a quiet café and munch on a croissant as you watch the world go by. If the foodie in you is still not sated, there’s the traditional Chettinad fare and fusion food, along with the authentic French cuisine.

While there are several places of worship, museums, parks and beaches to visit, the more notable sites are—Sri Aurobindo Ashram, Beach road, Raj Niwas and the Jawahar Toy Museum. If it’s excitement that you seek, you might be disappointed. Puducherry is more of a destination where you immerse yourself in the serenity and culture of the place. Experience a petite piece of France right here in India. 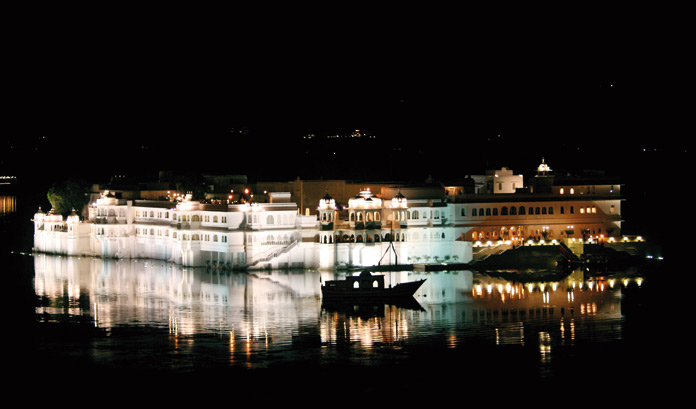 Indian literature and Bollywood movies depict the monsoons as the season of romance. If a romantic getaway is what you are looking for, the city of Udaipur is where you should go. Luxurious palaces, exotic camel rides and robust Rajasthani food all complete the affair. Take a sunset cruise on Fateh Sagar lake followed by dinner at the Lake Palace, which lights up at night. View Udaipur’s past at the museum Bagore-ki-Haveli; it has a vast collection of Mewar paintings, glassworks and over a 100 rooms with costumes and modern art.

Puppet shows, desert safaris, musical concerts… there are so many things to do in Udaipur. The picturesque Saheliyon-ki-Bari or the ‘Garden of maidens’ should also be on your agenda. Its lush greenery, gorgeous flowerbeds, bubbling fountains and tranquil lotus ponds create quite the romantic ambience.

The maharajas knew a thing or two about the enchantment of the monsoons and even built a palace to see and enjoy the rains. Sajjan Garh, or the Monsoon Palace, is situated atop a hill and overlooks Lake Pichola. The massive windows of the palace were particularly designed to view the sunset. And offer stunning views they do, especially when the sky turns red and orange to signal the impending rain. Udaipur is filled with colour and exuberance that even the heaviest downpour cannot dampen. So if the passion has been missing from your relationship, rekindle it in Udaipur.

A version of this feature was first published in the July 2014 issue of Complete Wellbeing.