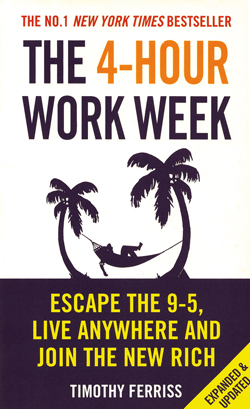 Tim Ferris starts this revolutionary book with a scene in which he is excitedly awaiting the final round of the World Tango Championship semi finals in Buenos Aires. Soon, you learn that his life is a series of adventures that he’s signing up for, in different parts of the world. “I’ve spent the last three years of my life among those who live in worlds currently beyond your imagination,” he writes as he introduces the concept of the New Rich—people who create luxury lifestyles in the present and abandon what he calls “the deferred lifestyle”, which primarily revolves around the idea that real freedom in life can be enjoyed only post retirement.

This book has a power to transform your life in ways that you cannot fathom—but only if you’re ready. Tim’s no-nonsense style conveys the core message of the book, which is that people don’t want to be millionaires—they want to experience what they believe only millions can buy. The fantasy isn’t a bank balance of millions but a lifestyle of complete freedom that it supposedly allows, says Tim.

The book goes on to offer concrete, step-by-step ideas that can take you from the rigmarole of your nine-to-five existence to a life that you have only dreamed of. And there are examples galore. True stories of individuals who have dumped the old, dreary ways in favour the new ‘now’ focussed lifestyle. Most importantly, each of these people are happier and more fulfilled than they were before they made the switch from the traditional, security-conscious life that they discover is a myth perpetuated by the society. Tim’s own story—he went from $40,000 per year and 80 hours per week to $40,000 per month and 4 hours a week—is inspirational and thought-provoking. It makes you question your priorities… and gives you enough reason to contemplate making the switch to a life of authentic freedom.