5 Period Questions we’re Too Embarrassed to Ask Our Gynecologist

Menstruation is an inevitable cycle in a woman’s life. It is considered as a boon; even though it brings along many inconveniences.

Sometimes it is tampon issue and at other times, women are clueless about how to manage their mood swings along with those ‘Oh so painful’ cramps! There are some problems that could be easily discussed with friends, family members and gynecologists; yet there are certain situations that women are too embarrassed to discuss with anyone, even their gynecologists.

Here is a list of some of those questions and their answers. While we recommend women of every age group to visit a gynecologist to discuss such issues, if they are become overwhelming to manage.

Does having an orgasm relieve cramps?

Not so surprisingly, Yes! Oxytocin hormone is elevated at the time of orgasm. This hormone is produced in the hypothalamus [a part of the brain] and is said to be ‘nature’s pain reliever’. Oxytocin is also called ‘cuddling hormone’ and due to its effects on feelings, a woman feels more connected to the partner. This little affection at the time of periods might help relieve cramps.

Other than this, the production of other hormones such as prostaglandins may also change when a woman orgasms, and this helps relieve cramps.

Orgasm may help the sloughing process during menstruation- shedding of the endometrial lining of the uterus.

Is it normal to get sexually aroused during periods?

This varies from one woman to another. There is a category of woman who won’t experience any sexual drive during their period at all and have very low libido. This is regulated by hormones such as estradiol- primary sex hormone and progesterone, which helps regulate the cycle and increases as the period date approaches.

On the other hand, while estrogen levels are low, testosterone levels are high. Testosterone is linked with the sex drive of a woman. Hence, some woman experiences a high sex drive at the time of her period.

The only way to answer – why this happens! A gynecologist should be consulted.

How to indulge in sexual intercourse without being messy? 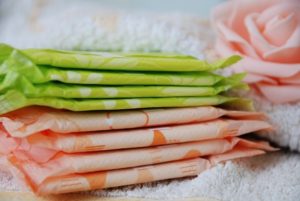 No doubt, vaginal intercourse during periods can become a little “all over the place”, and women may wonder whether there is a way to do it ‘neatly’? Well, not without the help of some tools.

Also Read: How to Make Your Eyes Healthy? 5 Best Foods to Eat Regularly

A cervical cup or diaphragm might be of some help. One can also try a flexible catchment such as a softcup. This nestles around the cervix.

If nothing works, then one can continue with the traditional methods- use of dark towels over the sheets which  will have to be washed thoroughly after intercourse.

Are there any options other than tampons and pads?

There are quite a few options other than pads and tampons such as- Reusable menstrual pads. Apart from being economic, these are also environment-friendly and non-toxic. Also, the users have claimed that it is way more comfortable than that of the traditional ones.

Menstrual cups: These are flexible catchment devices and easily nestle inside the vagina with suction. These cups can contain the menstrual blood for 12 hours.

The new thing in the market is period panties, which is a revised version of reusable pads. They are worn in addition or instead of other hygiene products. Each panty is designed efficiently so that it can soak blood for the entire day. At the end of the day, the panty should be rinsed and washed normally. However, it is advisable to check the soaking capacity of the panty; as different brands offer different absorbing limit.

Is it possible to conceive during periods?

There is a very low probability of women getting pregnant during their menstruation as there is no egg to fertilize at that time. However, women tend to ovulate at different times during their cycle; hence, it may be possible to conceive if the woman ovulates too quickly or has a short cycle.

To avoid such circumstances, it is advisable to use protection during intercourse.